the inauguration in san miguel

san miguel de allende was abuzz with regards to barack obama's presidential inauguration. i've noticed that a large number of the town's american expat population seem to be quite socially progressive. suffice to say, i'm ok with that.

so on the morning of january 20, 2009, restaurants & bars opened early and had their large tv screens set to the inauguration. all of them choosing cnn as their channel of choice.

i saw retired expats walking in blue obama/biden shirts and some women in red,white & blue scarves. around 10am, an hour before the swearing in, there were a few of them frantically walking by the jardin looking for a place that was not yet crowded & maybe hoping to score an empty seat or two.

personally, the expat population in san miguel has been a nice surprise addition to my people watching tendencies. i thought my move here would be to enjoy the culture & lifestyle of the mexican people but i also find the expats to be a fascinating unique & separate subculture themselves. 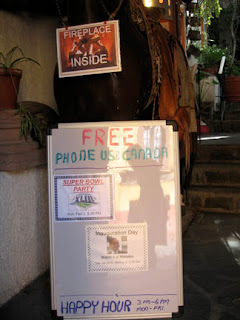 a sports bar advertising the inauguration & the superbowl. 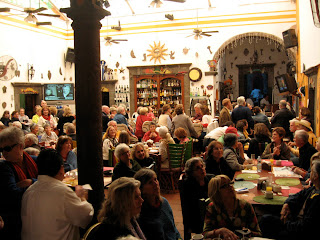 i took a peak at the more prominent "Democrats Abroad" hosted event in this restaurant. soon, people will be turned away as i saw others standing on chairs. 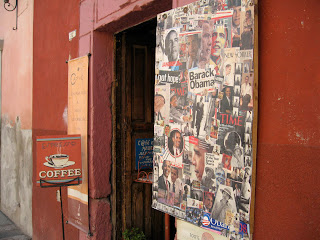 i finally found a cafe that wasn't too crowded. seems like the owner was busy decorating the place for that day. obama buttons were even being sold inside. 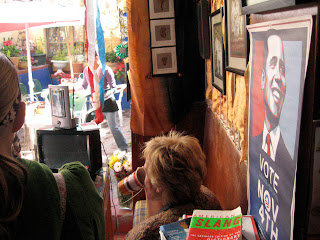 the small dinky tv with the spanish telecast (for the latecomers). 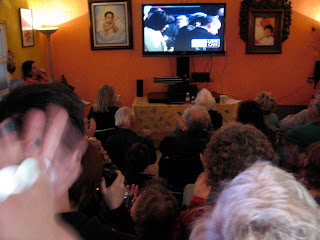 applause after the swearing in. the large tv for the american cnn telecast. afterwards, the cafe played the boss' "born in the USA" & jimi hendrix's "star spangled banner", most likely unaware that these were protest songs. but hey, still good stuff.
at 10:55 PM 2 comments: 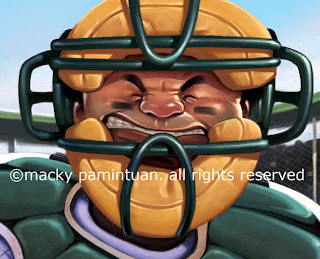 it's official. final. done. terminado. after much revisions, a childbirth (not mine), holiday breaks (sadly, not mine either) & a careful lesson in baseball science (looong story). i can now safely say that my 7th picture book is officially completed.

it is an alphabet book with a baseball theme (my second book with the sport). i find it interesting that i've accumulated a number of baseball related projects -- i also did a baseball themed greeting card & a "sing-a-long" baseball picture book a few years back. i'm guessing it was all because of one early baseball image from my portfolio soon after art school.

maybe someday i get to do a basketball book. then again, i may have to write that one.

** a small note: the two images in this post are cropped from that book. i hesitate showing any full images until the book is officially advertised by the publisher, so please don't share the image. just to be careful, i've also decided not to mention the book title. 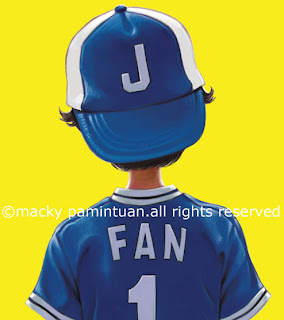